If you have questions about hosting or raiding on Twitch, you've come to the right place! Hosting (and raiding) is a feature implemented on Twitch that allows you to "send" your viewers to another channel once you have completed your stream. This social sharing feature allows you and other channels to share viewership, introduce your viewers to each other, and generally help to grow the communities of all channels involved. In a way, it is a good way to preserve the viewer count of your broadcast by "sharing" it with someone else. There are many creative ways to use hosting and raiding on Twitch to help your channel and other channels. In this article we will discuss how to host people on Twitch, why you would want to do it, and who to host for maximum effect.

Quick Navigation
what is hosting or raiding on twitch?
Hosting
raiding
how to host on twitch
Using autohost on Twitch
how to raid on twitch
Why should you host or raid someone?

what is hosting or raiding on twitch?

First of all, it is important to realize there is a difference between hosting and raiding a Twitch channel. While both of these features are great for sharing viewers and growing communities, they do work slightly differently. Let's explain those differences real quick:

Hosting a channel allows you to show someone else's broadcast on your channel. This means that your viewers stay in your chat, but will see the broadcast of the channel you choose to host. This allows you to have more control over the chat experience and prevents the two chats from mixing together into one.

Why would you want to do that? For instance, if you just finished your stream but have a friend who just started a new speed run, you can host your friends channel. This will allow you to still talk with your chat (in your own channel's chat room) while watching your friend's broadcast. Think of it as a shared viewing experience contained within your channel. Instead of watching you, your viewers are now watching whoever you choose to host. They will all remain on your channel and in your chat.

Raiding works a little bit differently, and mainly with how the chatting experience changes. When you host someone, the hosted channel cannot communicate with the new viewers since they are still in the original chat room. However with raiding, you can "ship" your entire viewer list over to the new channel. This means they will be sent over to the new channel as both viewers and chatters.

This is a good way to increase both viewership and chat activity in a raided channel. The raided channel can also interact with the new viewers, and the viewers can talk back to the raided channel through their chat. This does mean that your channel will lose all viewers and people in chat unless they choose to decline the raid.

how to host on twitch

As a broadcaster, you have the option to host or raid channels whenever you want. Any channel can be hosted and any broadcaster can host another channel. In order to host a channel, you can simply type in your own chatroom:

For example, if you wanted to host the official Riot Games channel for an LCS game, you would type;

Remember, this will embed the Riot Games channel stream directly into yours, but nothing will happen to your chatroom so you can still interact and chat with them.

If new viewers come to your channel while you are in host mode, they will see the hosted channel's broadcast. If you want to stop hosting a channel, simply type in your own chatroom:

You should note that you can change the hosted channel up to 3 times in a given 30 minute period. So if the channel you hosted suddenly goes offline, you can switch your host to a different channel.

If you have more questions, you can view the official help documentation on Twitch.

Autohost is a feature offered on Twitch that allows you to have a list of pre-approved channels to host when you are not live. This is a great way to share any viewers who come to your offline channel with friends or other communities. Instead of seeing your offline screen, viewers will see a channel on your autohost list. You should note that autohosting will never take over your live broadcast - it will only switch on when you are offline. You can also still manually host even with autohost enabled.

how to raid on twitch

First, it's important to tell your chat that you are about to raid another channel. Since raids are different from hosts in that they "ship" the viewers over to the raided channel, it is polite to give advanced warning in case some of your viewers don't want to switch chatrooms. Once you are ready, all you need to do is type in your own chat:

This will create a pinned message in your chatroom with a 10 second countdown timer and a Raid Now button. After 10 seconds, you can click the Raid Now button to execute the raid and send all your viewers over to the raided channel! Do note that only the broadcaster can click this button. 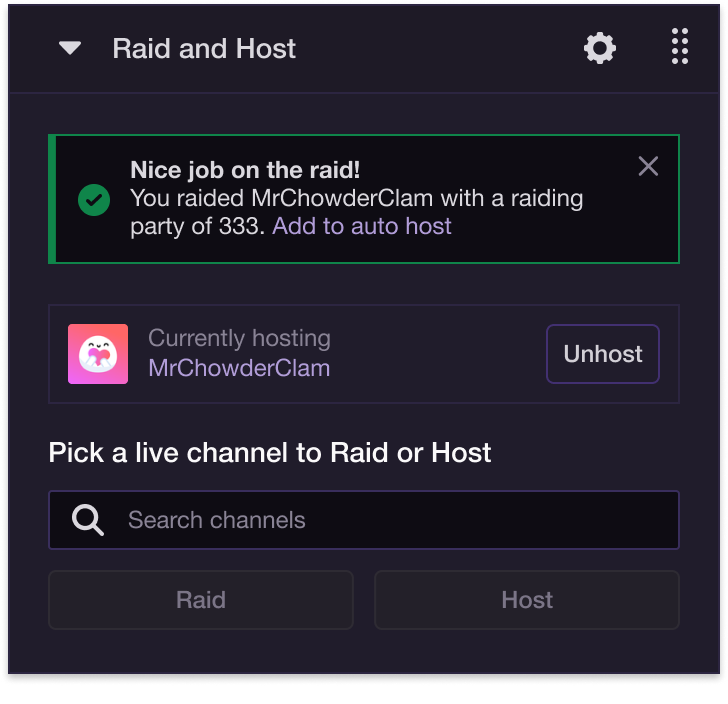 If you don't take any action after 80 seconds, the raid will happen automatically. Viewers in your chat will see a pinned message letting them know that they are joining a raid, and will tell them which channel they are raiding. Viewers can leave the raid if they want while the countdown is still active by clicking the Leave button on the pinned message.

If you are the channel being raided, you will see a message in your chatroom telling you:

<channelname> is raiding with a party of <number of raiders>

So if you see this in your chat, be sure to thank and welcome all the new viewers!

It is also important to note that if you raid a channel, you will also automatically host that channel. So any new viewers that enter your channel after the raid has started will see that you've all moved on to another channel.

If your channel has been raided but you don't want the incoming viewers for any reason, you can always put your chat into Follower-Only or Subscriber-Only chat mode. If you need to report a channel for inappropriately raiding, you can click the gear icon in your chatroom and click on Recent Raids to select from a list of channels which recently raided you.

Alternatively, if you find that you are being spammed with raids from random accounts, you can disallow raids from all people, or only allow raids from friends, teammates and followed channels by visiting your channel settings. 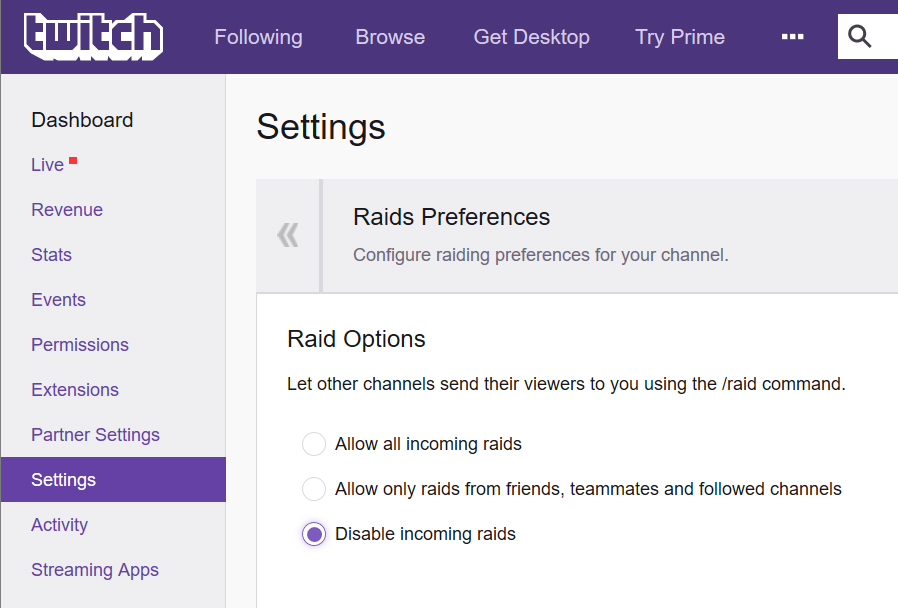 Why should you host or raid someone?

You may be wondering what the point is of Twitch's raid and hosting features. One obvious benefit is that you can continue to entertain you audience even after you go offline. This helps to keep viewers in your chat (when hosting) even after you have finished broadcasting. It helps to build a community effect and strengthens viewership. Instead of jumping to another channel when you end your stream, your viewers will stick around for longer in your own chatroom.

When raiding, it allows you to "share" your viewership with another channel. If you have friends or a Twitch Team that you want to help grow, you can use hosting and raids as a tool to give them more viewers. Raiding also allows you to give your regular viewers exposure to new channels that they may not know of. Plus, when you host or raid someone, it is very likely that they will return the favor in the future!

Most streamers also have alerts set up for raids and hosts. This means that if you raid or host a channel, they will show a brief message on their screen and in their chat that you have hosted or raided them with the amount of viewers. This is a great way to get your channel name in front of a new audience. Just be sure that you aren't spam-raiding or spam-hosting people, or you may get reported for doing so!

There are no comments